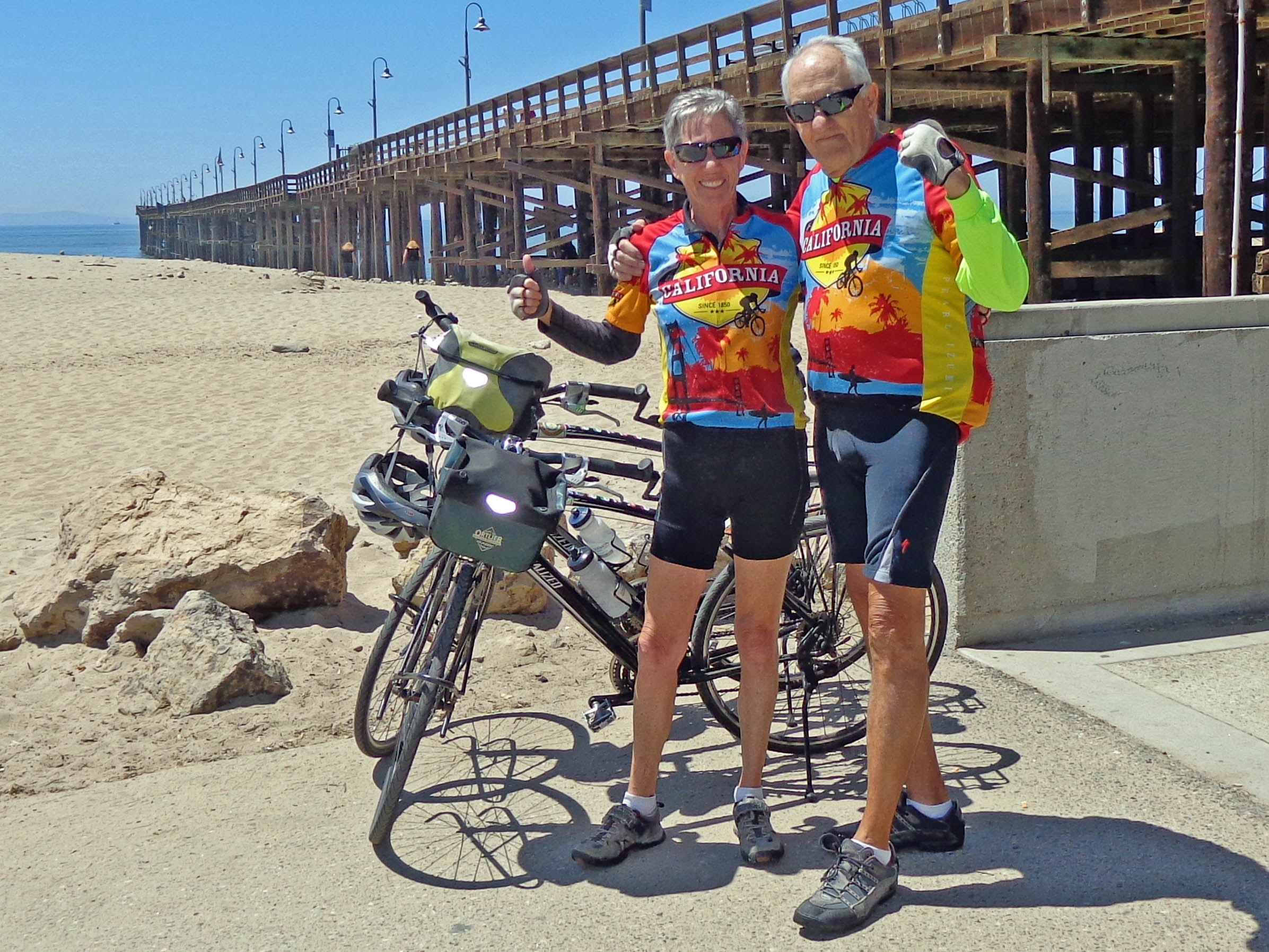 Cat and Pat Patterson pose for photos at Ventura Pier during one of their many 20-mile rides from their home in Pierpont.

The continuing adventures of a high-powered couple show the benefits of active aging.

After cycling for 23,000 miles over four years in 57 countries, the hardest part of returning home for one couple was learning to walk again.

Pat and Catherine (Cat) Patterson of Ventura, who rode their bikes through the U.S., Canada, Europe, Africa and South and Central America from 2002 to 2006 (and were the subject of a Ventana Monthly story in 2008), didn’t cycle around town upon coming home because they weren’t used to the car traffic. So they tried walking instead.

“It was really hard on our knees,” Pat said. “After being on a bike for so long, we were using very different muscles.”

Overall, however, the physical and mental muscles they built during their biking adventures have been positive for their health.

Pat, now 77, and Cat, 63, each recently had major surgery (for internal problems unrelated to biking). The couple believe they are recovering quickly because they are still in excellent post-tour shape — more than a decade later.

“I atrophied so much after surgery; imagine if I hadn’t had the muscle mass,” Pat said.

The strength they built up during four years on bikes no doubt contributed to their enduring health and vitality. Their current commitment to physical activity, however, has also kept them in such exceptional shape. The couple said they work out at a gym three days a week, including a stationary bike for Pat, and yoga, Pilates and swimming for Cat. The other four days they’re back on their bikes.

Before their surgeries, the Pattersons rode up the coast from their home in Pierpont to Carpinteria or Ojai, about 35 miles round trip. They’re taking it a little easier now, having shortened those bike trips to a mere 20 miles. Surgery or not, these models of fitness continue to get more exercise than folks a fraction of their age.

Preparing for their big trip in 2002 created some healthy habits that have been hard to break. To train for their around-the-world tour, Cat said, the couple cycled three to four days a week carrying all their gear. They each lugged about 80 pounds, including clothes, a tent and cooking supplies.

“But we didn’t do anything major as far as training,” Cat said. “The training was just being on the road.”

During their trip the Pattersons spent nine months traveling through 17 countries in Africa. They’ve recently relived that experience, and exercised some intellectual muscles, too, by writing about it in their newly self-published book, The African Dream (Bicycling Beyond Boundaries), available at Amazon.com.

In Africa, Pat said, they usually rode for five days straight, 50 to 60 miles per day, then took days off to sightsee.
“It’s a slow way to travel, but the best way,” he said. “You see things you just can’t see any other way.”

“It was just our life, what we were doing every day, so we took our time,” Cat said. “Ride, rest, have lunch. Ride, shower, eat dinner, go to bed.” An excellent recipe for long-term health, it would seem.

There were challenges, of course. Cat, a vegetarian, said the limited diet did not serve her well on the bicycling tour.

“We were burning at least 4,000 to 5,000 calories a day; I realized I needed a lot more protein and calories,” she said. “That was one of the best things though — with all the exercise, we could eat whatever we wanted.”

Another issue cropped up relatively quickly on the first leg of their trip. Biking across the U.S., Cat said she collapsed from dehydration in Salt Lake City and had to go into the hospital.

According to Dr. Eric G. Sletten of Ventura, this isn’t uncommon for long-distance bikers. Sletten is the head team physician at California State University, Northridge, and director of the Sletten Wellness Medical Center in Ventura. He’s also certified in sports medicine and knowledgeable about the health risks inherent in bicycling: he has ridden through Europe, Laos and Vietnam.

“Medically, the biggest risk for all bicyclists, but especially people who are older, is dehydration and heat illness,” Sletten said. “As you get older, you’re much less efficient in thermal regulation, so hydration is the biggest trick.”

Sletten said the other big health risk is bicycles vs. cars. “Bicycling is 80 percent skill and 20 percent space. It’s important for a biker to know what a car wants to do.”

But they also saw baboons, elephants and other wild creatures, feasted on bread spread with argan-nut butter and honey, made friends from around the world and discovered how kind and helpful people are toward strangers from another country. They reciprocated the hospitality.

“Our greatest weapon was our smiles,” Pat said.

As the three-year planned trip turned into four years, and funds started running low, the Pattersons chose to continue the adventure rather than return home. “We decided to sell the house,” Pat recalled. It’s a decision they’ve never regretted.

The memories of that first tour will always be with them. And judging by how well they have weathered the inevitable health issues that crop up with advancing age, the physical stamina and strength they developed from their travels — and their commitment to good health since their return — has stayed with them as well.

Today, “We’re a little softer on travel because of age,” Pat said. Any future bike trips they take will likely be combined with a car. But make no mistake: The Pattersons are definitely letting the good times continue to roll. In fact, the adventurous couple took off in May for a month touring around Paris, Italy, Croatia, Slovenia, Austria and the Czech Republic.

Pat said he calls their four-year adventure “reality TV without the TV. We didn’t have sound and lighting crews, or a helicopter to fly us out. Every day was like a mystery. All we had to do to solve it was to get on board and pedal.”

Follow the Pattersons’ past and present bike adventures at www.worldriders2.com.