Bicycling is NOT just for KIDS, first in a series: A Little History of WorldRiders2 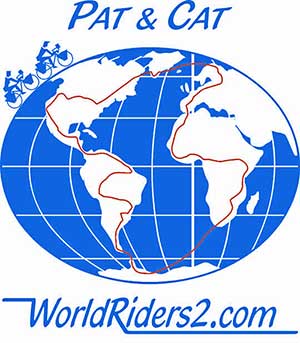 When your FIRST ACT was HUGE Where do you go FROM THERE?

Work, of course, filled both Pat and Cat’s lives for most of the time prior to Bicycle Touring taking over.
Pat’s career path from an early age was in the grocery business. Working with chain stores then an early move to self employment. In his early 30s Pat began his career in the Real Estate profession.

Cat entered the publishing business at a young age then transitioned to computer sales and installation of large industrial firms and governmental agencies.

Cat and Pat met while both were mired down in messy divorces. Pat loves to tells of their meeting. “We were in a bar, however, a very upscale bar. Cat walked toward me as a trio played dance music. She stopped, stood resolutely and said, may I have this dance. Slightly taken aback I said, I’m with someone. Cat stepped closer and said, I didn’t ask you to marry me, I just asked for a dance! Of course I was HOOKED!”

Pat first became enamored with bicycle touring while on a guided bike tour in China. He knew he’d found his destiny. Slowly his dream became reality. Unfortunately his wife’s didn’t share the dream. They departed on an ill fated bicycle tour that ended in divorce.

Driven to bankruptcy by her ex-husband, they had to sell most possessions including her home. Cat and Pat decided to get together and begin building a new life. Pat, who had spent almost three years cycling around the world, had thousands of photos and more than a hundred hours of video. Cat, being the organizer , began viewing and cataloging them. As she progressed she became more and more fascinated. Pat had a dream to cycle in Africa. Cat expanded the dream to a second around the world tour they would dub, WorldRiders2.

In short time they found a buyer for their successful Realty Firm, sold their cars and rented their house. With a small amount of fanfare from former associates, friends and family, they set off to explore the world. They cycled through 57 countries that included 17 in Africa. 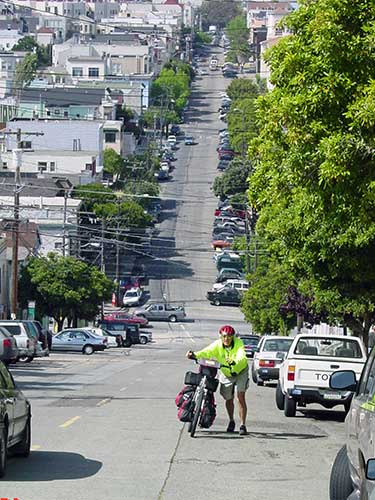 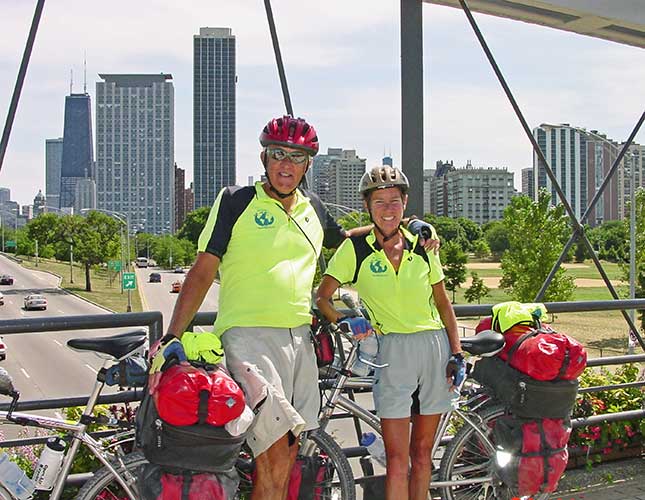 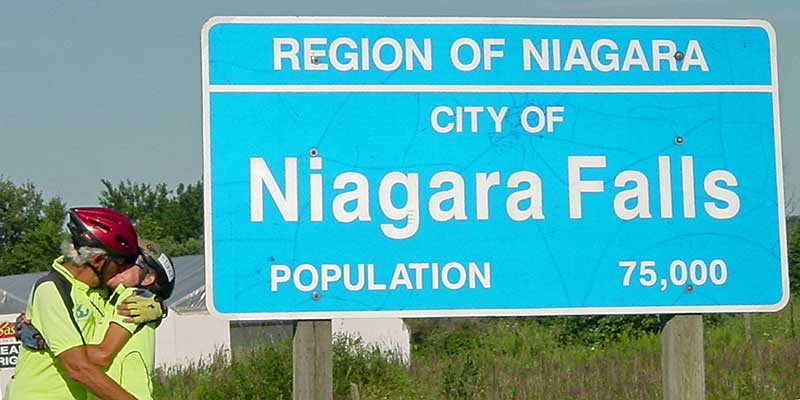 A Cyclist’s Honeymoon at Niagara Falls

We weren’t exactly greenhorns when we set off around the world. Pat had spent almost 3 years cycling around the world in 1988 – 1990. It was all new to Cat but she was one tough cookie! This is the abridged version of a long bike ride.

Planning for the trip began with ideas and a map of the USA. We sold our Real Estate company, and set off from our office in Oxnard, CA up coast to San Francisco. It was a tough upwind ride in beautiful scenery. Camping was not a priority but we knew there would be times when it would be a necessity. So, we began practicing along the coast, in the redwoods and state parks. It was April, cold, and we already mentioned that wind. 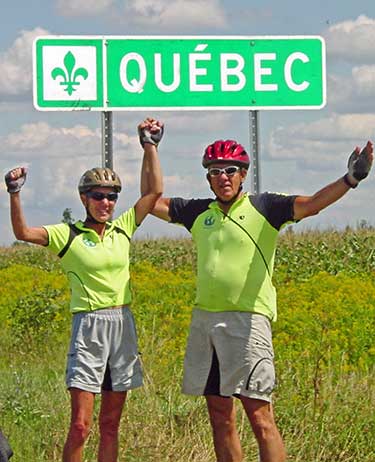 Canada, last of the Continent 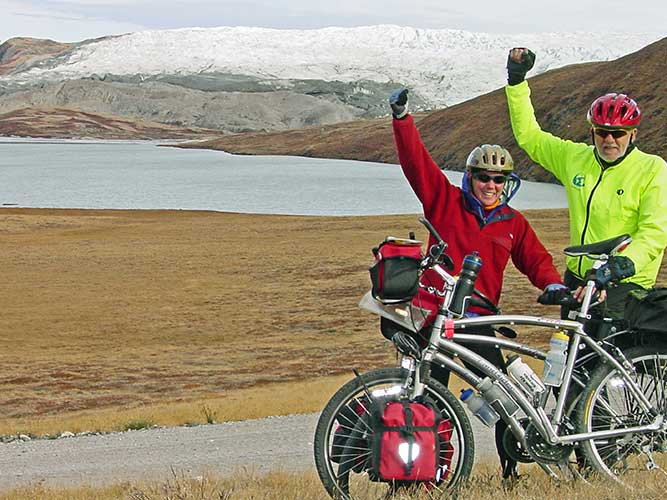 Greenland, at the Polar Ice Cap

Our final day on the North American Continent was spent in beautiful Quebec City. Next stop, Greenland. A learning experience, there are very few roads in Greenland. none that connect the cities. We did visit both coasts and the major cities. Bike rides where there were roads, then travel by boat. 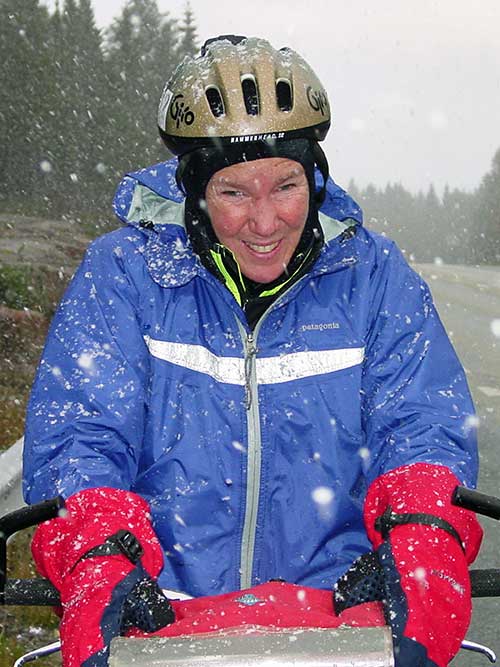 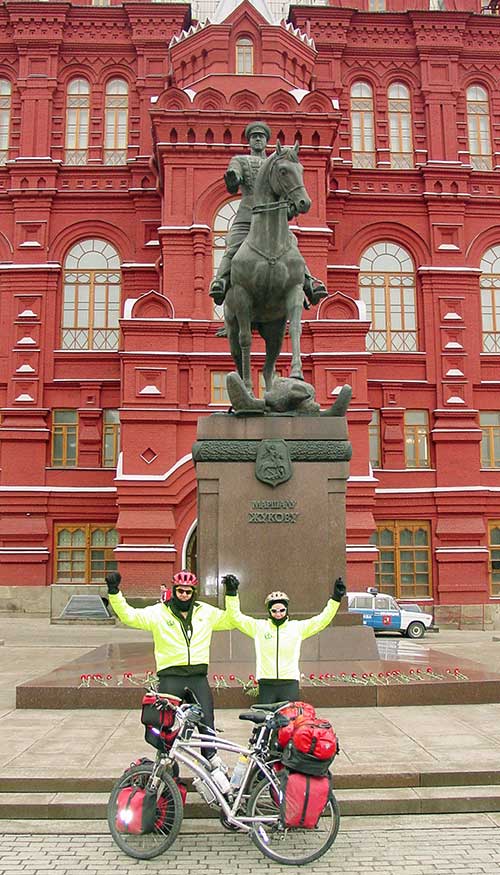 Norway, Sweden, Finland and Russia. All those cold days left us anxious to keep moving south. Springtime came while we were in Poland. Trees began to sprout leaves, grass turned from brown to green. A welcome change! 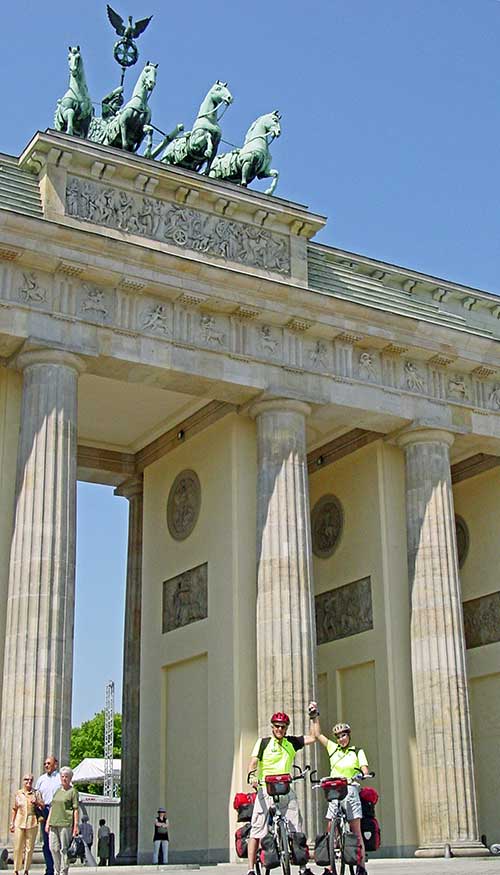 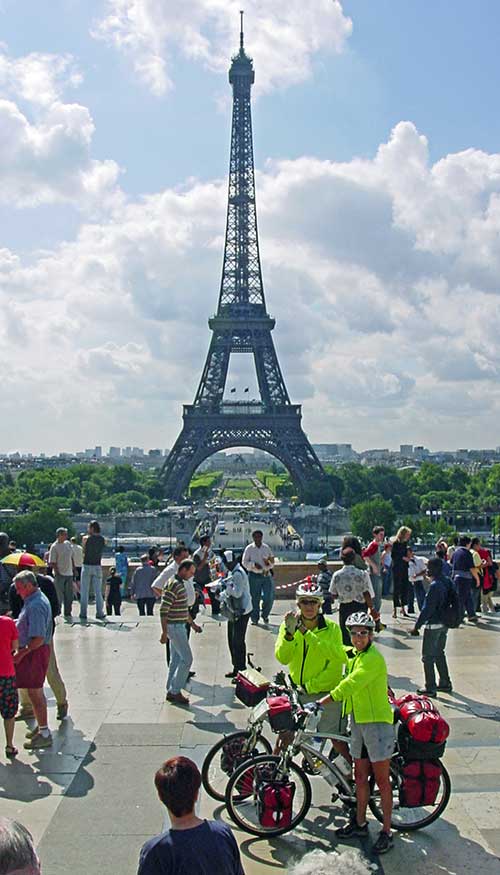 All roads led us south. Out of Germany into The Netherlands then Belgium and France. OOO, LALA, Pareee! We feasted on wonderful weather, food and wines. This is what made pedaling all those thousands of miles worthwhile! 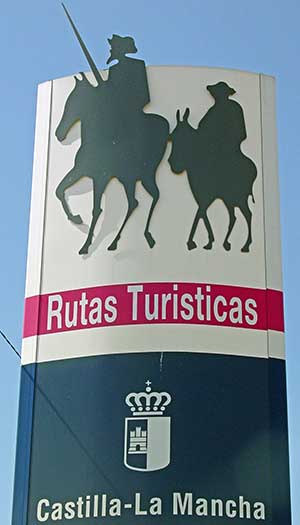 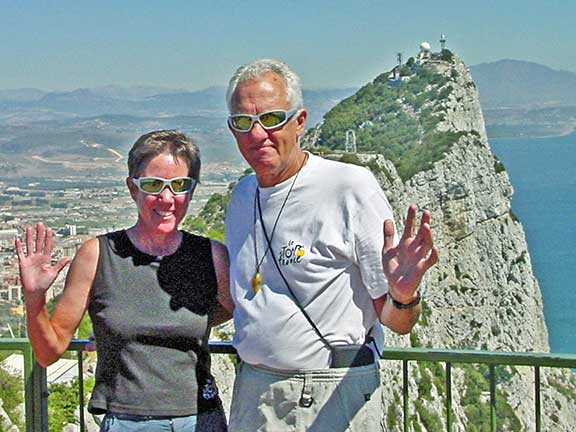 On top of the ‘ROCK’, Gibraltar. Africa in Background

Out of France and down through Spain. Passing by the windmills of Don Quixote fame and through a culture that had lived through the Inquisitions and conquered the Moors. Gibraltar, AKA the Rock, is a British Colony. It was a 3 day respite for us, English spoken with a British flare.

Not having thought about it we were amazed that from the Top of the Rock we could see Africa through the haze. 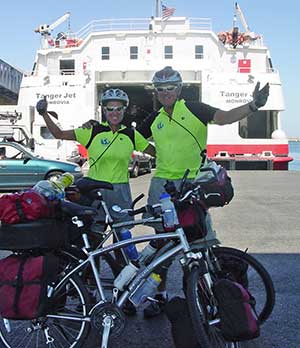 The Tangier Ferry to Morocco 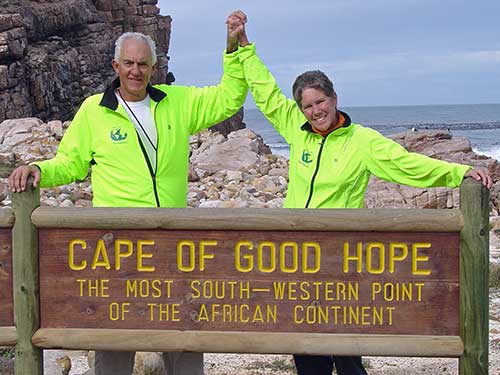 The African Dream, the desire to see and experience the African Continent was the impetus for our 4 year voyage. Our entire journey through 17 African countries over a nine month period is well documented in our first book now in second edition in easier to read format with more than 400 photos. 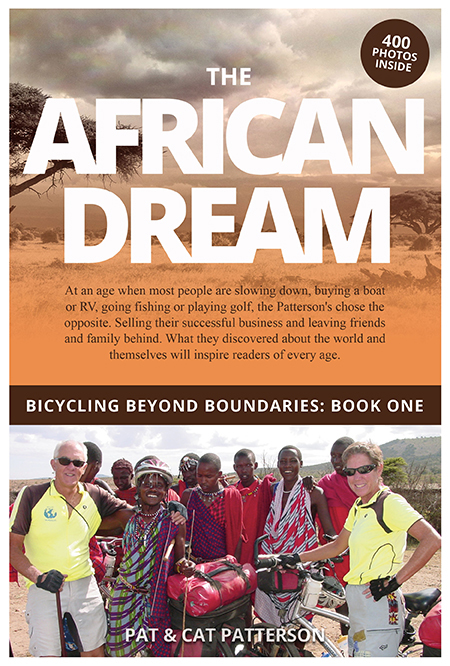 A flight to Buenos Aires, Argentina in June and we found ourselves in the midst of a cold and snowy winter. A chance encounter with a couple of gals who saw the map on our jackets led to a bus trip north as far as Rio de Janeiro to wait out winter.

Back all the way to Buenos Aires for a few wonderful days as tourists then a flight to Ushuaia and winter. We posed for this picture on August 28th and set off on a wintery, slippery then muddy bicycle ride north. 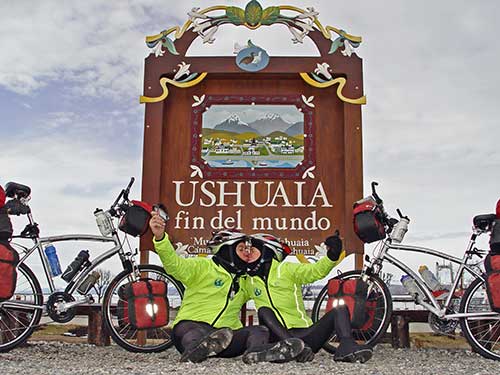 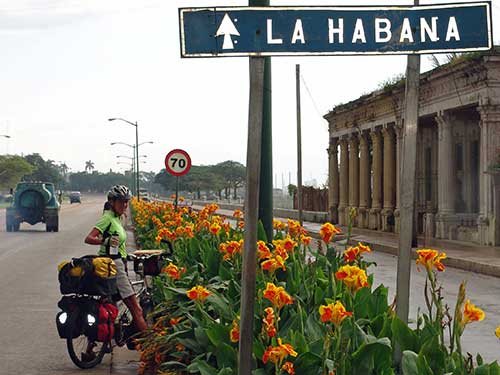 On the Road to Havana, Cuba

Riding north we learned how huge Argentina is from north to south. Along the way we visited every South America country except Paraguay. Out of Argentina we rode through the altitude of Bolivia, around Lake Titicaca and DOWN into Peru. North into Ecuador Then down the Amazon River, north out of Brazil through all three Guiana’s and into Venezuela and Columbia.

After most of the Central American countries we pedaled from Belize, the English speaking country, in to Mexico. There in Cancun we made our long awaited move, a flight to Cuba.

Cuba the Forbidden Island – Book Two in the Bicycling Beyond Boundaries Series. 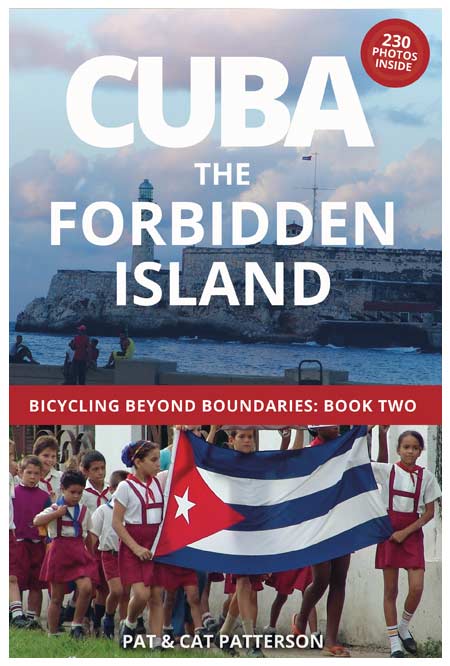 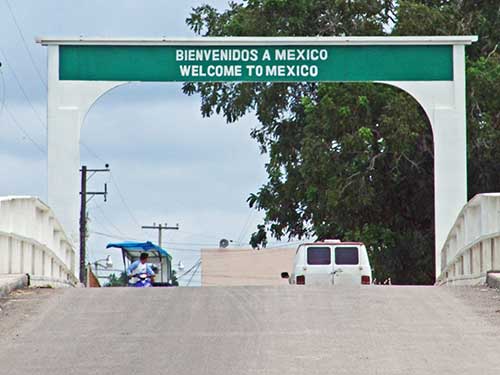 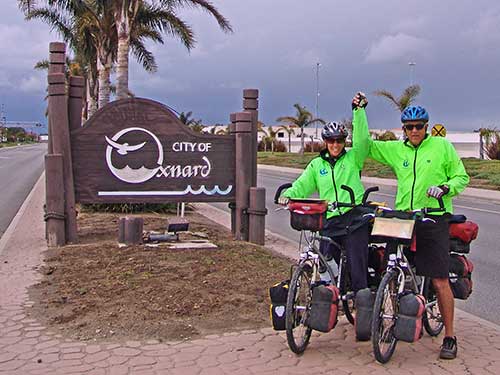 Mexico is pretty huge, too. We set off from Cancun headed north then slowly crossed to the Pacific Ocean at Tijuana, Baja California, Mexico. Our family and many friends, new and long time, met us at the border. We cycled with new friends Wayne and Kristina to their home in Laguna Niguel then onward to Oxnard and a rainy day. Friends gathered in the drizzle to welcome us. 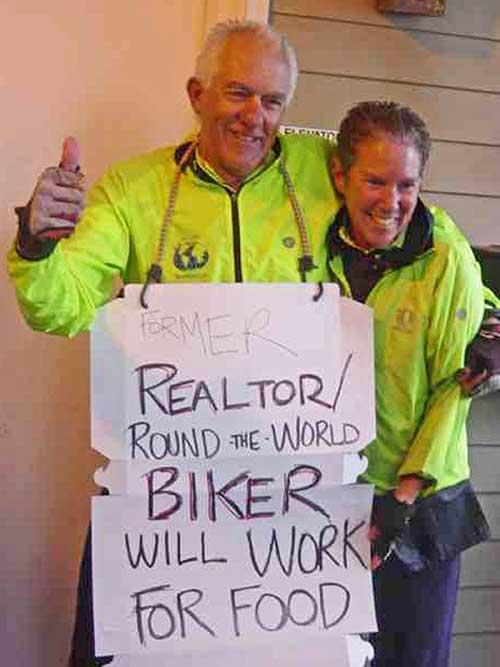 Do not go gentle into that good night, Old age should burn and rave at close of day; Rage, rage against the dying of the light.

And so, WE SHALL RAGE! We Shall Adjust and Continue as best we can! Stay tuned to our BLOG, we’ll share the ways that we adjust and RAGE!

“We know What BICYCLING FEELS LIKE…EVERY-SINGLE-TIME!”